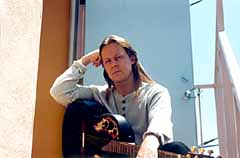 In 1989 when Andrey Misin for the first time has appeared on the TV-set, the country experienced intoxication from Freedom. Sluices have opened, and together with cheap pop on air even more often it was possible to hear serious musicians, fairly trying to talk to public about true values of this world. The Elite celebrated a short holiday, and strange songs of Misin came on this holiday as it is impossible by the way.

To him it was already far for thirty, and he was excited with eternal categories: God - Devil, Kindness - Evil, Birth - Death, Love - Hatred. In allies he took serious poetry, is especial much - from Imants Ziedonis and Sergey Patrushev, and in music sendings were audible to epical symphonysm of Borodin, even more often - melodies of ascetic folklore of northern peoples - Karelians, Finns, Vepses, Latvians. And at his concerts among young amateurs of intellectual rock it was simple possible to meet gray conservatoire teachers.

Very quickly by Misin has released LP on the "Melody Firm", three solo CD's and joint CD with group "Alliance" and Norwegian ethno-vocalist Mari Boine. These records were on sale in Europe. Him frequently called on the international festivals, and after tour round on universities of Canada and America he has received a rank of the honourable city dweller Little Rock (Arkansas, USA).

And then... Then the style on Russian abroad has passed, domestic show business became independent and has got stronger, Boris Grebenschikov has sung "Rock'n'Roll", and the main musical event of the country of steel "Christmas meetings" by Alla Pugacheva. The holiday on "elite street" was finished.

To change itself and change to itself Misin could not. And did not want.


So has told once favourite by him Imants Ziedonis. And he has left in a shadow.

Today Misin creates of small instrumental masterpieces for documentary movies, circus musicals, music for theatre and songs for top ten a russian show business, Including our incomparable Prima donna. But all this work - from a category "for the staff", and public on a stage can see him infrequently.